The Most Popular Thrush: Eastern Bluebirds

I have to admit, there are days that I have a hard time getting my work done, as I often look out my office window to an open field where ten to twelve bluebirds are feeding and fluttering around. Bluebirds are rather enjoyable to watch; no wonder they are the most popular thrush. Their willingness to live close to us, their turalee turalay song and their overall beauty have inspired generations of bird watchers and artists alike.
Did You Know? Fairview has a wonderful selection of bluebird products. Choose from:

Identifying
Adult male eastern bluebirds are more colorful than their female counterparts, with a sky-blue head, back, wings and tail accompanied by a reddish-brown throat, breast and flanks and a white lower belly and undertail, thus making them easily seen fluttering perch to perch. The colors of the female eastern bluebird echo those of the male, though they are more muted. In fact, the blue of the female is a drab grayish-blue with a grayish-brown wash across the back. Other than the obvious muted tones, another physical characteristic that may help differentiate between the male and female is a white eye-ring that may be apparent on the female.

Flight
The flight pattern of a bluebird changes greatly as they fly from short to long distances. For example, when flying to and from their nest box they usually make many stops along the way, stopping from perch to perch. In doing so, they move their wings very quickly giving their flight a fluttery, moth-like appearance. When flying high in the air for longer distances, their flight is strong and continuous and their wings move at a slower rate.

Habitat
Bluebirds are nonmigratory throughout the United States in open habitats, such as grasslands, parks, pastures and suburban lawns (if provided a nesting box). The two main habitat requirements of bluebirds are cavities for nesting and roosting and large, open grassy areas for foraging. 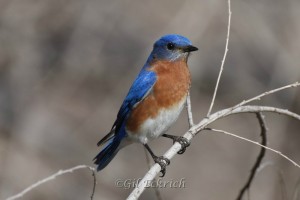 Courtship & Nesting
Bluebirds are cavity nesters and will use natural cavities in trees, woodpecker holes and of course nest boxes. In fact, bluebird populations declined during the 1960s & 70s, but thanks to nest box campaigns and individuals like you and me (for providing nest boxes), their population has increased.

Bluebird breeding cycles are late February through mid-August. In late February and early March, the male bluebird begins staking out his territory, usually encompassing many acres, searching for a place to nest. Once he has established “his territory,” he will sing along the borders letting all other passerby’s know where his territory is, thus fending off all male intruders and welcoming the females.

When a curious female enters his territory, she continues to the nest box he has selected. While the male is perched on top of the box, the female will enter to begin inspecting. This ritual repeats itself, box after box, until the female finds something suitable. Once a box is selected, the female begins to build the nest inside using grass, bark strips and hair. She will lay three to six eggs and incubates them for twelve to sixteen days. After the eggs hatch, both male and female bluebirds care for the nestlings until they fledge, generally fourteen to eighteen days after hatching. This is definitely a sight to see!

Nest Box Placement
It is important to note that bluebirds are vulnerable to competition from other cavity nesters (starlings, house sparrows, etc.), so it is crucial that you purchase a nesting box made specifically with bluebirds in mind, as the entry hole size varies from box to box (1-1/2 inches for bluebirds).

Just as important as nest box selection is mounting and placement. Nest boxes should be placed on metal poles with a pole-mounted baffle below the house, placed in a large open area and should be about five feet from the ground. Bluebirds will tolerate a box as high as fifteen feet high, but five feet makes it easier for you to monitor and clean the box. In addition, when mounting make sure the entrance hole is directed away from prevailing winds (to reduce rainfall collecting in the box) and faces away from direct sun exposure (especially our hot afternoon sun!).

Nest Box Monitoring
While bluebirds are nesting in your box, the way to learn and to enjoy is by monitoring your nest boxes. You need to monitor the box at least one a week from March through August. Before opening the box, I suggest you scratch on the side of the box. Doing so makes the mother and nestlings aware that you are there. Many times the mother (if she is in the box) will leave; the nestlings (if they have arrived) will crouch, thus lowering the risk of them jumping out of the box. (Note: I suggest you stop monitoring after the chicks are twelve days old. They will be too big and may jump out prematurely.)

Although, you want to start monitoring your box long before the nestlings arrive. Ideally, you will begin monitoring as soon as you notice activity, when you see the female placing material inside to begin building the nest. Give her a couple of days to build her nest. On the third or fourth day, walk to the nest box making some noise to alert her; do not sneak up on her. If she hears you she will fly out and observe you. You should see her empty nest inside the box. Close and latch the box and repeat every three to five days. After the second visit she will know you will not harm her or the nest; she will then begin to lay eggs. She will usually lay one a day until she has laid three to six eggs. Then the incubation process begins. It will take twelve to sixteen days. Continue to monitor the box, making a little noise as you approach the box. She will fly out when you approach and will come back when you leave.

Note: You need to clean out the nest box when they are gone to get ready for the next brood. They usually have three broods each summer.

Feeding
Bluebirds love insects, berries and fruit. They are beginning to discover they can get food at regular seed feeders. They are unable to crack seed shells but will eat sunflower meat as well as suet and peanut butter. Mealworms are also a delicacy for bluebirds as well as most backyard birds.

Note: Bluebirds do collect insects on the ground, making them particularly vulnerable to lawn chemicals.

I hope this helps you to enjoy bluebirds; they are beautiful, fascinating creatures that have had a positive rebound from near extinction (and their population continues to rise)! Won’t you join the efforts of many and encourage bluebirds to visit your yard? You will be glad you did.